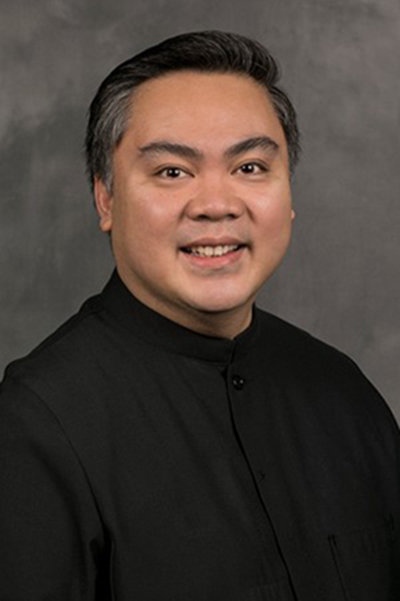 In a brief ceremony, Novice Dennis Reyes was clothed in the Benedictine habit at Saint Meinrad Archabbey, St. Meinrad, IN, on January 19, 2019. He now begins a year of monastic formation, including study of the Rule of St. Benedict and monastic history.

Novice Dennis, 42, is a native of Manila, Philippines.

His work has received numerous awards in international competitions and concerts by juries comprised of experts in the field. His most recent achievement is winning the grand prize at the 6th Sond’Ar-te Electric Ensemble Composition Competition in 2016, where he bested composers from 18 countries.

He is also one of five composers from around the world to be invited by the University of London’s School of Oriental and African Studies to write a new electroacoustic piece for its annual Composer’s Conference and Festival.

He also participated in the International Electroacoustic Music Festival hosted by the Conservatorio Santa Cecilia in Rome. Reyes was the only composer of Asian descent and one of two composers based in the United States to receive that year’s honor.

Reyes received the President’s Research in Diversity Travel Award from the University of Illinois, an award bestowed by the university president to 15 high-performing faculty and graduate students across the three campuses of the university conducting research in their respective fields.

As a novice, he takes a year off from formal studies and trades. The novitiate is a time of prayer and learning intended to help a novice discern his vocation as a monk. At the end of this year, a novice may be permitted to profess temporary vows of obedience, fidelity to the monastic way of life and stability in the community of Saint Meinrad.