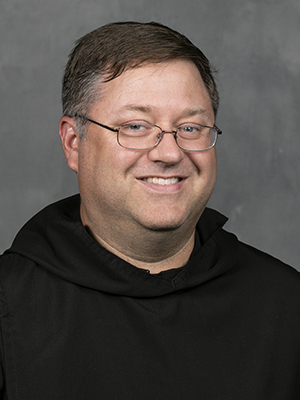 Fr. Christian Raab hails originally from Michigan City, IN. After graduating from Indiana University with a degree in history and religious studies, he taught history and theology at St. Benedict High School in Chicago, IL.

During this time, he earned an MA degree from Loyola University in pastoral studies with a concentration in religious education. He entered Saint Meinrad Archabbey in 2003, professed first vows in 2005, and solemn vows in 2008. He earned his Master of Divinity from Saint Meinrad Seminary and School of Theology and was ordained to the priesthood in 2009.

From 2009-2014, he lived and studied at the Catholic University of America in Washington, DC, where he also served as a priest-in-residence at Flather Hall through CUA's office of campus ministry. He earned his licentiate in sacred theology in 2012 and his doctorate in sacred theology in 2015, both from the Catholic University of America.

He serves as a formation dean and assistant professor of systematic theology at Saint Meinrad Seminary and School of Theology. He has taught the core courses of Marriage, Holy Orders, Eucharist, and Reconciliation. He has offered electives such as Fatherhood: Ecclesial and Familial, Theology of Consecrated Life, and Christianity, Culture, and Politics. His research and writing are in the areas of ecclesiology, sacraments, vocations and states of life, spirituality, and theological anthropology.

He is the author of the book Understanding the Religious Priesthood: History, Theology, and Controversy (Washington, DC: CUA, 2020), and of various scholarly, pastoral, and spiritual essays and articles. With Fr. Harry Hagan, OSB, he is the co-editor of The Tradition of Catholic Prayer (Collegeville, MN: Liturgical Press, 2007).

For many years, he served as the director of the "One Bread, One Cup" College Ministerial Internship Program and today he continues his dedication to college students by offering sacramental ministry at the University of Evansville Newman Center. In his spare time, he likes to read, walk the dog, play guitar, and travel.