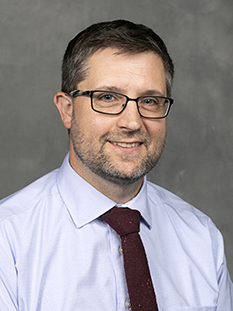 John Schlachter was born in Euclid, Ohio and grew up in the rural town of Lodi, Ohio, equidistant from Cleveland and Akron. His family moved to Akron in 1997. He attended Catholic grade school at his home parish of Saint Francis Xavier in Medina, Ohio, until 6th grade and graduated from Walsh Jesuit High School in Cuyahoga Falls Ohio in 1998. Since he and his father share a first name, they both use their middle names among friends, colleagues and acquaintances. Dr. Schlachter thus goes by either “John” or “Teep” depending on the comfort-level of the company.

He has had a lifelong interest in baseball, history, storytelling and the roots and development of American popular music. These interests led to his interest in philosophy and history in undergraduate studies at Xavier University, where he majored in Philosophy, minored in English and History, and proudly served as the NCAA approved mascot, Dartagnan, from 1999-2001. After graduation, John studied in the School of Philosophy at the Catholic University of America, completing his MA Thesis, Plato’s Lysis: Friendship and the Polis in 2006, and his dissertation, Myth and Truth in Heidegger’s Lecture Course on Parmenides in September of 2016.

While living in Washington, DC during graduate study, John was a teaching fellow of the School of Philosophy faculty from 2006 to 2011, teaching Phil 201 The Classical Mind and Phil 202 The Modern Mind in each semester, including two summer terms. During the summers, he worked for the Washington Capitals Hockey team’s PR department and taught remedial and advanced reading skills to grade school students. He served two terms as the CUA graduate student body president, One term as its VP, and 5 as the Secretary. John Married his wife, Jessica, in July of 2011, and they have five children. From 2011 until 2015, he served as the Principal of Assumption Catholic School, a PK-6 grade school in Hibbing, MN. John originally joined the administration of Saint Meinrad in 2015 as the director of Assessment, became Director of Admissions in 2016, and began teaching in the Graduate Theology and Seminary programs in Spring of 2017.

He has two published articles, A Virtue Ethics Analysis of Supply Chain Collaboration (2007), co-written with Matthew Drake of Duquesne University; and Interpreting Parables within Parables: A Reply to Wians’ reading of The Consolation of Philosophy (2011). His areas of specialization are ancient Greek philosophy, metaphysics, meta-ethics, and phenomenology. Areas of competence include: early modern epistemology, Medieval metaphysics, Medieval ethics and politics, and business ethics.