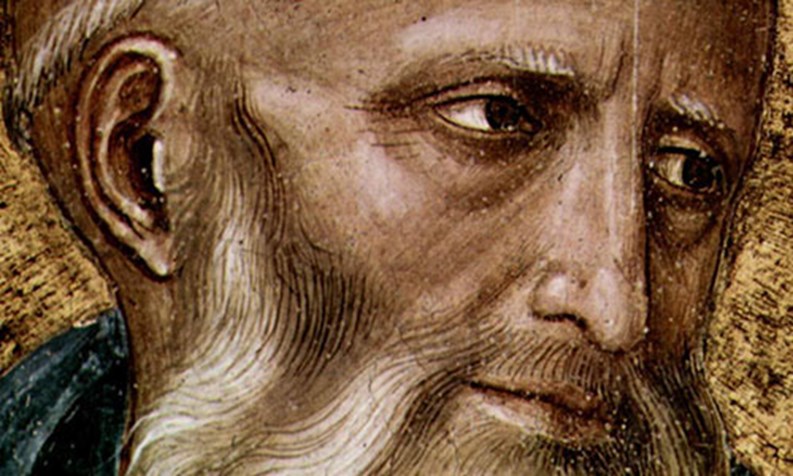 "Renounce yourself in order to follow Christ."
Rule of St. Benedict 4.10

If I were to ask you to quote the Benedictine motto, you might say, "Oh, that's easy, Ora et Labora - prayer and work!" If so, you might be a little taken aback upon hearing me let you down easy by saying, "Well, sort of, but not really!"

It's only been since the 19th century that the phrase Ora et Labora has been associated with Benedictine monasticism, and it probably has to do with justifying monastic life at the peak of the Industrial Revolution. Be that as it may, Benedictines have existed since about the year 530, when St. Benedict wrote his Rule  for monks. If a motto is intended to express the spirit of an organization, then the better one for Benedictines consists of the more ancient sentiment summed up in the single word Pax.

If you visit other Benedictine monasteries, you are likely to see this simple Latin word for "peace" carved in stone or wood perhaps, and displayed over a main gate or doorway. Here at Saint Meinrad, PAX appears carved in sandstone at the lower right corner of the great oak doors at the entrance to our monastery. This briefer motto comes from the longer version of the same sentiment - Pax intrantibus - which means, "Peace to those entering here."

Peace expresses the spirit of the Benedictine way of life, even though the Rule  directly mentions peace in only a few key places. But as far as Benedictine values are concerned, it's my firm belief that this is the foremost of them all. After all, being dedicated to the pursuit of Christian peace is one of the most important things monks and nuns can do in a world torn by the violence, social discord, and outright warfare that we read about in news feeds and daily newspapers.

As a retreat master, I often hear retreatants comment on the peace they feel as a result of having come to Saint Meinrad - that always makes me smile as I say to myself, "Well, we must be doing it right then!" (Of course, the lay co-workers who work hard to see to the needs of guests and provide the hospitality people have come to expect of Saint Meinrad also deserve much of the credit for that.)

Benedict lived in a place and time of great unrest, and far more violent than our own. The collapse of the Roman Empire and the incursion of "Teutonic barbarians," and "Old Romans" from Byzantium in the east brought violent social upheaval to 6th-century Italy. It was a hard world to live in, but an easy one to die in.

St. Benedict established his monastery on Monte Cassino, a high plateau towering above the surrounding countryside in central Italy. An oasis from worldly ways, his community of monks lived in relative peace, demonstrating a way of living that was "different from the world's way" (RB 4.20). Benedict knew that for community life to work, monks had to strive every day to do what Jesus expects of any true disciple - "renounce yourself" (RB 4.10; cf. Mt 16:24; Lk 9:23).

Benedictine peace is the product of a life characterized by obedience, humility and simplicity. In short, Christian peace stems from putting one's whole "self" out of mind, and the needs of others ahead of one's own.