Built On Stone: The Rock Upon Which the Abbey Was Founded 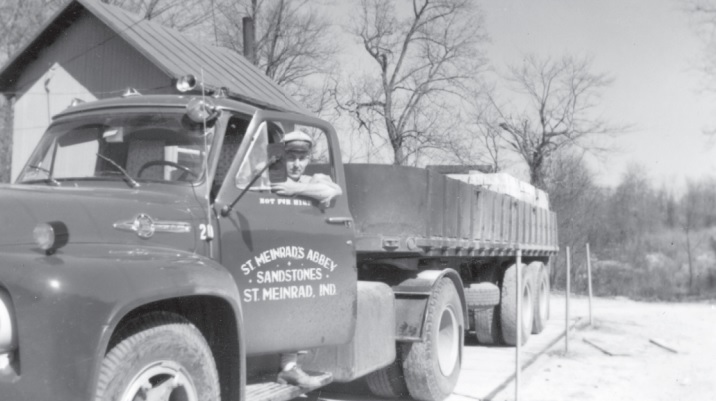 For a monastery to endure for more than 160 years, it must be built on a solid foundation. At Saint Meinrad Archabbey, that is literally true.

The sandstone that makes up most of the buildings at Saint Meinrad was discovered early in the community’s history. Two monks from the Swiss Abbey of Einsiedeln established the new foundation in 1854 when they bought farmland and moved into the log farmhouse.

By the time the community was raised to an independent abbey in 1870, the monks had begun to build more permanent buildings from a resource found on their land: sandstone.

Fr. Albert Kleber, OSB, describes the building endeavor in History of St. Meinrad Archabbey 1854-1954 (Grail Publications, 1954). When the building site was determined, the top of the ridge had to be lowered by about 24 feet to make the site level. Kleber explains, “Fifty kegs of powder were used to blast the harder layers, from which a sandstone sufficiently hard to serve as building material for the inner walls of the basement was obtained.”

A few years earlier, a sandstone quarry was found on nearby Monte Cassino Hill. The stone from that quarry was used for the outside walls. The last stone was laid on December 19, 1873. Additional sandstone wings were added between 1874 and 1881.

The next big project was a new church. Work began in 1899 and the cornerstone was blessed on August 15, 1900. It took until 1907 for the construction to be complete.

Dr. Edward Shaughnessy wrote a history of the Archabbey Church in 2003 that explained how the stone was transported to the building site from the quarry site a mile away. He writes, “The labor involved in transporting the stone blocks constituted a task of nearly herculean proportions. These blocks, often 36-40 inches thick, had to be eased down the steep grade of Monte Cassino by oxen or mule, with wagon.”

As the Benedictine community grew, more buildings were added, made from the varicolored stone dug from the quarry: the (old) library wing in 1914, the major seminary building in 1923, and the Kleber Gym in 1930.

Joseph Hedinger, the last living member of the sandstone quarry gang, talked about the history of the quarry in a 2004 interview when he was 84 years old. According to Hedinger, in the early 1930s Saint Meinrad bought land near Ferdinand that would provide additional stone and serve as the finishing mill for the operation. Saint Meinrad sandstone could be sold to others in the building industry and provide revenue for the monastery.

This quarry remained in operation for 20 to 30 years until its supply of stone was exhausted. During its heyday, eight to 10 men worked daily at the quarry, using gang saws called “rockers” to cut the stone. Trucks loaded with slabs of sandstone delivered the product wherever it was needed.

Saint Meinrad later opened another quarry and worked from this site until the late 1960s, when the sandstone enterprise was closed. Sales were declining due to competition from other quarries, as well as a rise in the use of limestone, brick and precast concrete for building materials.

In its final years, the operation was headed by Fr. John Thuis, OSB, and Fr. Linus Swartz, OSB.

Besides the buildings on the Saint Meinrad campus, numerous examples of sandstone buildings can be seen in the town: the St. Meinrad Post Office, St. Meinrad American Legion, the parish church and rectory, and several homes.

Saint Meinrad sandstone also can be found at other abbeys and churches. The buildings at Blue Cloud Abbey in South Dakota were built with the stone, delivered on semi trucks to the site. Fr. Denis Quinkert, OSB, a Saint Meinrad monk who was a member of Blue Cloud before it closed in 2012, remembers working on the building site.

The buildings at Blue Cloud Abbey were erected from 1950 to 1967. For one summer, Fr. Denis worked as a stone cutter, trimming the large stones to the size required by the stonemasons.

Many churches and abbey buildings built during the quarry’s heyday featured Saint Meinrad sandstone on the exterior or the interior. In the 1930s and ’40s, Saint Meinrad supplied sandstone for St. Leo Abbey in St. Leo, FL. A story about building the church can be found on the abbey’s website.

Fr. James Hoge, OSB, writes, “In 1939 a light buff colored sandstone trim was begun to accentuate the exterior brick surface. This resulted from a unique barter arrangement between Saint Leo and St. Meinrad Abbey of southern Indiana: a truck would arrive loaded with stone from St. Meinrad quarry and the same truck would return to St. Meinrad loaded with citrus fruit from the Saint Leo Abbey groves.”

The final tally showed that 32 truckloads of sandstone had been swapped for 62 loads of oranges and grapefruit. Although Saint Meinrad has not reopened its sandstone business, it recently leased the quarry to a company that quarried the sandstone that was used to build the new Guest House and Retreat Center in 2004-05.