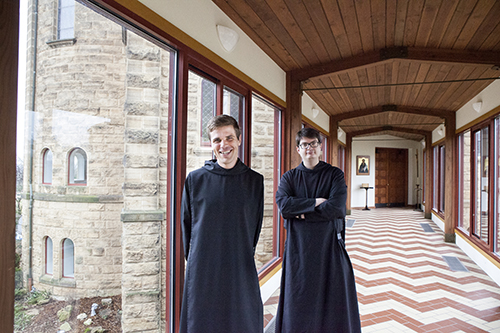 This week's episode of our "Echoes from the Bell Tower" podcast focuses on Gregorian chant - the sung prayers that have been a tradition at Saint Meinrad since our beginning.

This episode is somewhat timely, as Saint Meinrad recently celebrated the 50thanniversary of the first time the monastic community sang English chant. It was shortly after the Second Vatican Council and people could now pray in their own language, instead of the Latin everyone had been using for so many years.

Fr. Columba Kelly, OSB, today a chant scholar, was just beginning his life's work of writing English chant in the 1960s. His fellow monks were interested to see how his new English chant would sound.

Would the notes be the same? Would Fr. Columba just replace the Latin test with English and hope for the best?

It turns out that his studies in Rome had prepared Fr. Columba well for the challenge. He had learned that it is the text that takes priority. The music would serve the text.

He talks more about that process in the podcast, as do his confreres Fr. Tobias Colgan, Fr. Jeremy King and Fr. Harry Hagan, as well as Archabbey organist George Hubbard.

Oh, about that headline "Drinking God straight"? You'll have to listen to the podcast to hear Fr. Columba explain that.

We also have a podcast extra. In this three-minute interview, Fr. Harry explains how he created a font that allows you to compose chant using a computer keyboard.

There is also a link to a short audio clip of Saint Meinrad's Latin Schola singing "Lux Aeterna," first in Latin, then in English.

And for more selections from the chant CDs featured in this podcast, visit these links:

You can listen to the full episode at the top of this page or go to iTunes, Stitcher or wherever you get your podcasts and download "Echoes from the Bell Tower." Thanks for listening!

In this three-minute extra interview, Fr. Harry explains how he created a font that allows you to compose chant using a computer keyboard.