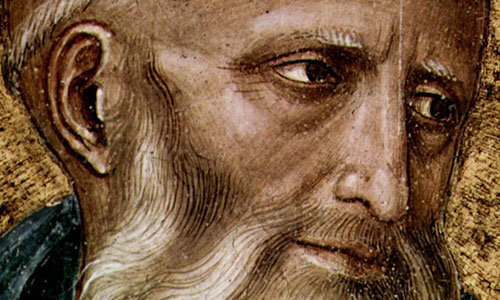 In the Dark Ages following the disintegration of the Roman Empire, people struggled with war, poverty and disease. Society seemed to have lost its intellectual and cultural center.

So, here is a thought: During those dark years, probably few people woke up and thought how glad they would be when the hard times were over and civilization revived in a new explosion of art, music and exploration. They thought the life they had was the way life would always be. They had no way of knowing we would look back on the years 400 - 1000 A.D. and label their time as the "Dark Ages."

So, here is a question: Are we living in a new "Dark Age" without realizing where we are? When we see the senseless violence everywhere, we seem to be living in a time of spiritual darkness. Where the human spirit is concerned, our center grounded in faith in the Eternal appears to have fallen apart. It feels as though lack of faith, cynicism, depression, greed and hate gain ground with every senseless act of violence.

In addition, in spite of all of our technology, war, hunger, poverty and disease afflict a growing number of people in too many countries. Peace has become the Holy Grail of modern civilization. We continually chase peace, but it is always just beyond our grasp.

We have a letter our older daughter sent some years ago when she traveled among the small islands in the San Blas Territory off the coast of Panama. She wrote; "The Kona Indians on these islands have maintained their traditional lifestyle in spite of the pressures of modern society. They believe they are God's chosen people and that God wants them to live in peace and harmony. Any time anyone in the clan causes a disruption, the entire tribe is in jeopardy of not going to heaven.

"They don't have jails. They don't need them. They frequently have town meetings where people talk about any problems. It's just like a big group therapy session. Over the years several different missionaries have come to the islands. However, since the missionaries always fight among themselves, which the Indians know goes against God's plan, they prefer their own faith to ours."

How can we stop the darkness from overwhelming us? A son of the early years of the Dark Ages (480-583), St. Benedict must have wondered the same thing. His answer was to establish small pockets of peace where work and study and community could flourish.

I think we are called to do the same. Our homes can become little pockets of peace where children and parents safely grow in love and faith. Our schools and churches can become havens against the darkness. Each of us must light a candle and let it shine. The little each of us can contribute makes a difference to someone here and now.

In J.R.R. Tolkien's The Hobbit, Gandalf says: "Saruman believes it is only great power that can hold evil back. But that is not what I have found. I have found that it is the small every-day deeds of ordinary folk that keep the darkness at bay. Small acts of kindness and love."

Just as the Renaissance in art, music and literature grew out of the old Dark Ages, I think perhaps a new Renaissance, one of the human spirit, is waiting just a little further down the road. Just over the horizon, where we can't yet see, there may be a new dawn of faith, a new understanding of how interconnected we are, a new appreciation for our broken planet and a new gratitude for life.

Even if we can see it yet, we can help us get there one small act of peace and kindness at a time.