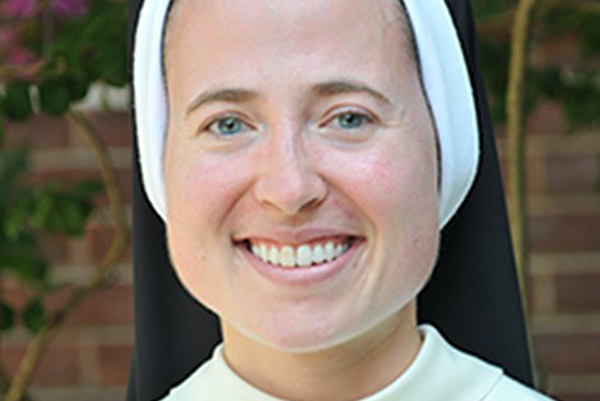 Stacey Winterrowd was not thinking about a religious vocation when she joined a group of youth from her parish to attend the “One Bread, One Cup” (OBOC) conference at Saint Meinrad during the summer of 2007.

An Indianapolis, IN, resident, she had just graduated from high school and was preparing to attend Ball State University in Muncie to study child development. Then she would get married and have children.

Although she is a cradle Catholic, she was not actively practicing or living out her faith. But after receiving the sacrament of Confirmation as a junior in high school, Stacey decided to attend Mass regularly and get more involved with the youth group. When her parish’s new youth minister, Tom Steiner, suggested the OBOC conference, she agreed to attend.

That experience planted the seeds of her vocation. Stacey is now Sr. Mary Xavier, with the Dominican Sisters of Saint Cecilia in Nashville, TN.

In fact, her OBOC experience convinced her to come back for two more summers, this time as a college intern. About 20 interns are hired each summer to help staff the summer conferences. During the other weeks of the internship, they take classes, do service work and engage in formation.

During those summers of 2008 and 2009, Sr. Mary Xavier still was not thinking about becoming a sister. “When I came back as an intern, the formation that we received from the monks and from the other speakers was really powerful,” she recalled.

Praying together daily as a community strengthened her spirituality. “Having the support of other young people that were trying to live their faith and wanted to share it with others” was so important, she said.

She made her first visit to the motherhouse in Nashville during her sophomore year of college. A group of girls from the Catholic Newman Center at Ball State was going on a retreat there and she joined them. Even then, she wasn’t thinking about a religious vocation.

She graduated from college in 2011 with a degree in child development and then worked as a FOCUS (Fellowship of Catholic University Students) missionary for two years. She was assigned to Loras College in Dubuque, Iowa.

During that time, her heart felt a tug toward a religious vocation. “I spent a couple of years there just trying to bring college students to a relationship with Christ, and the Lord just led me somehow to the convent,” Sr. Mary Xavier said. She remembers attending Eucharistic adoration and feeling the grace to pray, “Lord, I’ll do whatever you want me to.” Immediately, she realized she was being called to the Dominicans.

One reason she was interested in the Dominican sisters is that their primary apostolate is teaching. She finished the requirements for a teaching degree and is now teaching second graders at St. Joseph School in Cottleville, a suburb of St. Louis.

“I was very drawn to the fact that our community was wearing the religious habit. That meant a lot, that witness, which is what I experienced at Saint Meinrad. I love the balance of the contemplative and the active life that we have.”