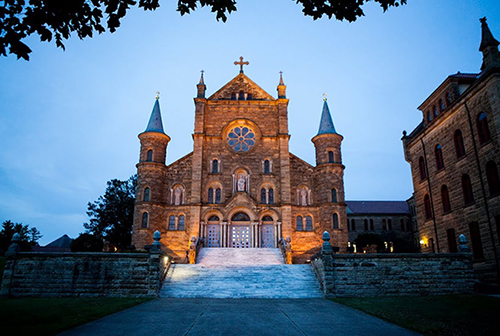 Editor's Note: Originally published on the personal blog of Tom Jelneck. Tom is a 1995 graduate of Saint Meinrad College and the owner of On Target Digital Marketing in Maitland, Florida.

Catholic school was part of my life. It all started with knuckle smacking nuns at Saint Mary’s in New London, continued on at Bishop Moore Catholic High School here in Orlando and, for the ultimate in Catholicly things, a seminary in the VERY rural farming community of St. Meinrad, Indiana.

My blogging / writing / marketing journey started at Bishop Moore. I was a pimply, socially awkward senior with lackluster grades, and frankly, not much confidence in my brain power at the time. Many things changed with ONE assignment. A new, really dynamic English teacher arrived on the scene. Suzanne Groth. Mrs. Groth, or Suzie as I was never allowed to call her, assigned the class a parody writing assignment. The assignment was to read A Separate Peace by John Knowles and construct a parody of the story.

I got to work. I turned it in, and like most days, I was asked to stay after class. Waiting for a huge disappointment or, talking to, I slinked up to the front of the class to meet Suzie. She handed me my paper and at the very top right corner, my eyes gazed upon a foreign grade. A++++++. Not only did I get the additional + marks, she wrote in amazingly neat cursive, EXCELLENT WORK. I was beaming. This parody, this assignment, and this grade, literally changed the way I looked at writing. This assignment woke something within me and sparked an amazing journey.

Being influenced by so much Catholicly stuff growing up, I had an inkling that I might want to pursue the priesthood. A school from Southern Indiana started to court me and after a weekend of discovery, I signed on the dotted line. This place, far removed from ANYTHING, is nestled on a hill overlooking a sleepy farming town. This place was meant for seclusion, introspection, discernment, and sometimes medieval torture. Throughout the campus you’ll see crosses, a cemetery with simple stone markers, breathtaking structures constructed out of sandstone. This holy place became my home for 4 years.

On the campus at Saint Meinrad was a working Archabbey. A gaggle of monks live, pray, teach, and work at Saint Meinrad. The community lives in unison and follows a simple rule of life set forth by St. Benedict. Not only do the black robe-wearing monks live here, they die here, and they are buried here on the property.

Some of the monks labored at their own printing press, others had priestly duties, some worked at the college, some took care of the grounds and rolled around on lawnmowers. This community was one like I’ve never seen before, and one that helped to form me in many ways. Ora et Labora, or Pray and Work is their mantra, and they live it daily.

Education at a seminary isn’t like the typical college experience. Sure, I dabbled with some tequila and cheap beer (Rolling Rock), but this education didn’t simply consist of school books. Formation, spiritual guidance, workshops, a TON of churchin’, and some pretty hard-core philosophy and theology courses were a standard part of the day. Weekends ALSO consisted of service, some more churchin’ and of course, homework. It was an experience like none other, but an experience that continued to build my passion for words and thought.

Throughout this ‘formation’ or education, I was introduced to so many amazing thinkers, writers, doers, and dreamers. This unique juxtaposition of medieval education, modern thought, romanticism, and ancient philosophy brewed just the right mix of deep thought. As I dug into Plato and became enthralled with Neoplatonism, essence vs. existence, and ontological arguments, my writing became more prolific. I remember grabbing a pad and a pen and going to remote areas of the campus that looked up at the Archabbey Church. I was never at a loss for inspiration there.

Hard Pass On The Collar.

After 4 long years at Saint Meinrad, I had made the determination that priestly life wasn’t a great fit for me. I had other aspirations. I wanted to build something, create something, run something, BUT, what in the world does one do with an English / Communication degree? Bolt on two minors, Philosophy and Theology, and you’ve got a less-than-stellar combo platter of opportunity when you graduate.

I ended up working for the Catholic Diocese of Orlando at San Pedro Retreat Center, made a soul-crushing $15,000 a year, BUT, taught myself HTML, SEO, and how to attract people to the website, and started to put that English degree to work by composing content for the retreat center. It worked. More retreats. More bookings. More summer camp sign-ups, the website, the content, and the SEO started to transform the ‘business.’ I loved helping this organization win.

What A Long Strange Trip.

A few zigs, a few zags, and 14 years ago, I built On Target Web Solutions (now, On Target Digital Marketing). Sitting in a 10x12 suite by UCF, I spent days upon days building On Target’s website, crafting content, and attracting new customers. Over time we’ve grown, and over time, the SEO game has evolved, BUT, the one constant has been content.

That degree from that monastery started to pay off in multiple ways. As On Target grew, I became the front person for the organization. I would craft content, write the social media, close deals, make the coffee, empty the trash, etc. One day, it occurred to me, I’m pretty darned good at this stuff, I should add the word expert after my name when I craft content. Social Media Expert, SEO Expert, Marketing Expert, etc.

On a warm, humid, swampy December’s day, I received a phone call from FOX. Terrified to answer, I picked up the call not knowing what lurked on the other end of the line. The well-known reporter began asking me about a new Google marketing product that had just come out that day. She wanted to come in to On Target and interview me about it. I knew just enough about this new product to be dangerous, but was terrified to goof up and bring potential shame upon the On Target team if I messed up.

After turning down an amazing earned media opportunity, by the grace of God, The Daily Buzz called the following week and booked me for a live appearance on their nationally broadcast morning show. This SECOND call started everything. Both media outlets found me by a Google search, seeking a Digital Marketing / Tech expert.

BECAUSE I put the word expert in my content, I've been blessed with 380+ television appearances on NBC, FOX, CBS, Spectrum & CCTV. My voice has lit up the airwaves with several radio interviews including NPR and WDBO. My expertise has been called upon by tech savvy reporters from USA Today and the Orlando Sentinel.

Blogging and owning your space can transform your business and your life. If you can write, write some more. If you can talk, create a podcast and share your experiences and wisdom. If you’re good on camera, do it, and do it often. Content can transform organizations, and individuals, I’m living proof. My biggest piece of advice, just get to work. Write it. Voice it. Video it. DO IT.