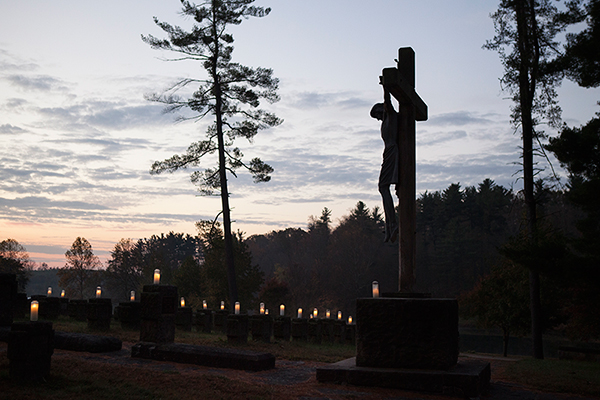 Most of us probably are paying a little more attention to the news these days than we ordinarily might. Probably a lot more. I know I am. We want to know what’s going on, what to expect. We seek answers. While we need to stay informed during times such as these, over-exposure to the headlines can be harmful. Too much focus on bad news can be overwhelming, distort our perception of reality, and induce anxiety that can ruin one’s mental, spiritual, and physical well-being. It’s difficult to find a healthy balance.

As most of you know, I worked in the newspaper business 17 years before coming to the monastery in 2006. First, I was a beat reporter for a few years, then later a news editor and managing editor at a small Ohio daily. Finally, from 1999 to 2006, I was the wire editor at a metropolitan daily. So, paying attention to the news is kind of ingrained within me. It was my job for many years, especially those last seven years as wire editor.

Minute by minute, I had to monitor world, national and state news issued by at least seven major wire services (along with several websites), remain in constant communication with editors, and edit the stories we published. Add to this excitement two nightly deadlines and a sometimes-difficult work environment, and you have a recipe for stress and anxiety. I’m surprised I didn’t have a stroke.

Even when I was not at work, I felt obligated to keep on top of everything, so that I wasn’t racing to catch up when I got to the newsroom. So, even at home, I usually had CNN on TV.

In some ways, the current crisis reminds me of both the fall of 2000 and the fall of 2001. During those two periods, the usual daily newsroom tension was injected with steroids – first during the unresolved presidential contest of 2000 between George W. Bush and Al Gore, and then during the horror and aftermath of September 11, 2001. If you recall, after the 2000 election, we didn’t know who had won for more than a month. Each day during that period, there seemed to be another dramatic turn. Then, after the shock of 9-11, there were rescue efforts, investigations, the implementation of heightened security, and retaliation and an international manhunt.

I had to be on top of it all 24/7, it seemed. I did my job reasonably well, but my mental and physical health took a severe pounding. At the time, I had no spiritual life. Mostly, I coped by drinking.

Fast forward to the present. I am still inclined to keep a close eye on what is happening. But I am no longer compelled (outwardly, at least) to “stay on top of it all.” It’s not my job any longer. Still, old habits can be hard to break, so I must be mindful of that. It helps to look for the inspirational stories out there – compassionate people helping neighbors in need, Italians defying isolation and death by singing together from their balconies. However, it is necessary for me to tune it all out occasionally—and listen to music, take a walk, read a good book or watch a light-hearted movie, share a funny story with a fellow monk, or check in by phone with a family member or friend. All these have become for me ways to flatten the anxiety curve, so that it does not spike out of control. (No baseball makes the task more difficult—but not impossible!)

However, the most important difference between now and then for me is my spiritual life. Though certainly not practiced perfectly, it is a life of faith rooted in the monastic way of life to which I have vowed myself. Scripture, prayer, and this monastery are rocks I did not have to stand upon 20 years ago. I am thankful for that.

Even so, faith during difficult times must be more than a coping mechanism, right? It must be the path by which we strive to find meaning -– and the path by which our response to circumstances is shaped. Faith is how we join ourselves to a wider human narrative of redemption.

C.S. Lewis famously wrote that “God whispers to us in our pleasures, speaks in our consciences, but shouts in our pain; it is His megaphone to rouse a deaf world." We in the monastery have not yet suffered because of the pandemic. We’ve been inconvenienced; our normal lives have been disrupted. But we aren’t gasping for air in a crowded hospital corridor. We are not doctors and nurses doggedly working around the clock to care for the ill at the risk of our own health. We haven’t lost jobs that provide for our families. Those people are suffering. What is God shouting to them in their pain? I don’t know … Maybe he shouts to all of us through them.

Certainly, it is true that God invites us all to ask ourselves: “What is God saying to us in this? What is he saying to me? What role should we – do I – have in the current crisis? What should be my response? Am I reminding myself daily, as St. Benedict urges, that I am going to die, while looking forward to holy Easter with joy and spiritual longing?”

I don’t have answers. But I think we are being divinely prompted to ask the questions. In the light of faith, that is good news—even though it arises from a virus. The grace of faith seeks out and recalls the good in all circumstances. And as St. Paul wrote to the Romans, “all things work together for good for those who love God” (8:28). For evidence of that, we need look no further than to our crucified Savior.