Make Way for Silence This Lent 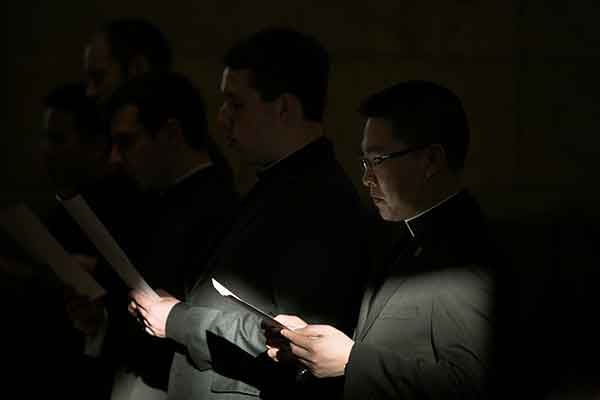 While searching for some direction for Lent, we read through St. Benedict's Rule. We found much good wisdom for those living the monastic life, but what about the rest of us?

Might there be some way to apply at least part of St. Benedict's Rule to our Lenten journey? Perhaps the easiest thing to do would be to take just a single portion and use that as a focus for the coming weeks.

We decided to focus on "silence," which, in our world of cell phones and computers, most of us find to be a precious commodity. In regard to silence, the Rule of St. Benedict cautions us to pay attention to our ways so that we do not sin with our tongue and to "refrain from coarse jests, and idle words or speech provoking laughter."

As a way of creating more silence in our daily lives, we decided to talk less, think before we speak, listen more and refrain from idle chatter.

One Tuesday evening before Ash Wednesday, our son called. Grandson David had an allergic reaction to an antibiotic and could not go to preschool the next morning. Could he stay with us instead?

Of course, and we would be glad to pick up his twin brother, Jamie, from preschool and bring him to our house before lunch. We hurried to the library to check out a SpongeBob video: so much for eliminating idle chatter.

Ash Wednesday found us in church early, eager to weed out noise and enjoy the kind of silence that would lead to prayer, reflection and deep spiritual growth. That afternoon, the boys' older sisters Cate and Rachel (also twins) stayed with us while Mom took the boys back to the doctor.

Meanwhile, our son and his wife also had a late-afternoon appointment with the bank because they are moving into a new house. We had offered to give the children supper and we had also invited our pastor for a quick bite before evening Mass.The grandkids entertained themselves with cheese pizza and "knock-knock" jokes in the kitchen. The good pastor had salmon with us in the dining room. (The kids think salmon is yucky.)

Late Ash Wednesday night, we found ourselves wondering what had become of our vow of silence. Actually, we realized it had worked well on one level. Aiming for silence had made it easier to think long enough to be positive with the little ones. Remembering to listen made it easier to be quiet enough to really hear what the children wanted to tell us.

As for refraining from "coarse jests, idle words and speech provoking laughter?" With young children and the company of SpongeBob, we may have a way to go with that one.