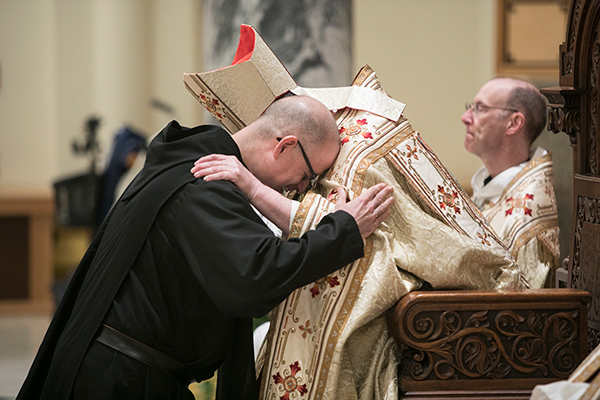 “The monk at fault is still bound to satisfaction."

When I was a seminarian, but not yet a monk, I would occasionally attend monastic services in the Archabbey Church. Back then, the community prayed Vespers at 7 p.m., so it was easy for me to take a study break to pray with the monks.

On rare occasion, the cantor would make a mistake intoning something, or sing one of his “solo” parts incorrectly. What I noticed was when that happened, the cantor would kneel down in front of the ambo (lectern) as the rest of the community filed past on their way back into the monastery cloister.

I was quite stunned the first time I saw it happen. I didn’t know it at the time, but this practice has to do with the need to “render satisfaction” to the community for a fault committed that, in some way, disturbed either the prayer or the harmony of the community.

There are sections of Benedict’s Rule that deal with faults committed by members – a kind of “penal code” – that describes appropriate punishments for various kinds of offenses; some are serious faults (RB 23-30) and some are lesser ones (RB 43-46).

Kneeling out, as we monks call it, is about expressing one’s own admission of fault or negligence, and a readiness to render satisfaction as a way “to correct by humility the wrong committed through negligence.” (RB 45.2) Most mistakes we make are simple human errors that cause some small disturbance.

Sometimes, though, a monk’s mistake or negligence leads to damage or loss of community property – our fleet of cars are especially susceptible during deer hunting season! The greater kinds of faults, however, result in wounded relationships, either among monks or between a monk and others (co-workers or guests).

Monks are expected to be ready to admit fault – whether small ones or greater ones – because Benedict insists on humility for his monks. Humility demands that a monk acknowledge what one has done to contribute to a loss of serenity among the brothers, or among our guests or co-workers.

To fully admit a fault requires that some measure of satisfaction be rendered. If an offense is personal, satisfaction is best done by apologizing directly to the one offended. But if it’s a simple mistake at the liturgy, or missing an assigned duty, then one makes satisfaction by kneeling out in the church or in the monk’s dining room (refectory) while the community prays the blessing over the food. If the superior feels it’s necessary, a monk at fault may be asked both to extend a personal apology and to kneel out.

St. Benedict makes much of the need to admit fault, not because he’s a “perfectionist” and expects the monks to be flawless. On the contrary, the liberty he believes Christ has called us to entails freedom from a culturally appropriated “need” to be flawless, which is precisely what can inhibit our ability to admit fault, or worse, induce us to engage in the “blame game” by pointing to others as having “caused” my mistakes! The “he/she made me do it” approach promotes breakdown in relationships, fueling resentment and potential disruptions to peace and harmony in the community.

As I have written before, the monastic community serves an “eschatological” purpose. As monks, we strive to build relationships of mutual respect. By doing so, we stand as witnesses to the Kingdom of God, a life built on justice, which is to say, “right relationships.”

We are a community of men committed to showing the world what God’s Kingdom demands: patience, humility, forgiveness and, above all, charity. This “work” we do is God’s work, proclaiming that God’s kingdom is “at hand” in our day, and in this place, until the Risen Christ reconciles all things in himself as the end (goal) of all time and history.