An Interview with Victor and Theresa Neff 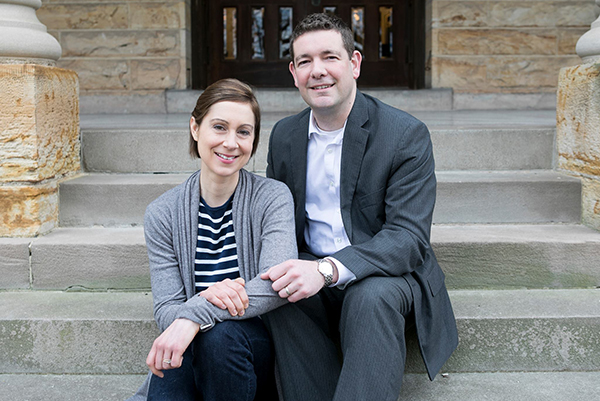 For Victor and Theresa (Parsons) Neff, the summers of 2006 and 2007 were full of memories, spiritual growth and developing life-long friendships.

“It’s been a while, 13 years,” says Theresa. “It’s been so long that you kind of forget the little things, but you don’t forget the relationships or the Hill.”

Victor and Theresa met at Saint Meinrad in the winter of 2005. They were both attending a retreat lead by Fr. Anthony Vinson, OSB, about discerning your vocation. When the retreat ended, Theresa applied for the summer 2006 College Ministerial Internship Program and was accepted. She was from Iowa City, IA, studying nursing at the University of Iowa.

Victor, a native of Aurora, IN, had graduated from Indiana University in 2004 with a bachelor’s degree in accounting, entrepreneurship and international business. He was discerning a vocation to the priesthood and preparing to enter the Saint Meinrad Seminary and School of Theology in the fall of 2006.

Fr. Anthony was the director of the “One Bread, One Cup” (OBOC) Liturgical Leadership Conference that summer and he invited Victor to help out with the summer youth conferences.

Every other week of the internship program, interns attend classes to learn about their Catholic faith. Then they take what they learned and apply it during the OBOC conferences.

For Theresa, the internship formed her as a human. “‘One Bread, One Cup’ was when I started to realize the ‘why’ of my faith. I was able to answer a lot of questions and it informed how I approached my prayer life,” she explains.

During the OBOC conferences, Theresa helped with the music ministry and lector training. She taught the youth participants what it means to be a lector or cantor and how to perform those roles during a liturgy.

She also learned a lot from those sessions. Now she cantors and lectors regularly at St. Matthew Catholic Church in Indianapolis, and she understands the why and how behind them.

“I stand at the altar when I cantor and I know when and where I’m supposed to move and I’m not intimidated by that,” explains Theresa. “I think that fear factor keeps people from participating in the Mass. ‘One Bread, One Cup’ takes that fear away because you have the knowledge of what you’re supposed to be doing.”

Victor was a jack-of-all-trades during the conferences, helping out where needed. He led the prayer before meals, created the conference slideshows, guided the crowds, and he also participated in the Ultimate Frisbee games and performed during the talent shows as a one-man band.

Victor and Theresa created a lot of memories during OBOC, but it’s the relationships that have really stuck with them.

“Relationships are such an important part of spirituality,” explains Victor. “To really live out your spirituality, it’s not something you do alone. It’s meant to be shared with other people.”

“It was neat for me to get to know them better, hear their vocation stories and develop relationships with people who, even to this day, I look up to as spiritual role models,” says Victor.

After OBOC in 2006, Theresa returned to school in Iowa and Victor entered seminary. They developed a friendship during that summer but they really didn’t keep in contact until they saw each other again at an intern reunion.

After that reunion, they would write to each other every once in a while. When Victor discerned that he wasn’t called to the priesthood, he moved to Iowa.

“Theresa was in Iowa, so I thought, ‘Here’s a cool girl I once knew; maybe a relationship would work out,’” says Victor. “It was a big risk, but it ended up working out.”

Victor and Theresa were married in 2009. They now live in Indianapolis with their greyhound, Zombie.

Being at Saint Meinrad and “One Bread, One Cup” gave them a spiritual home and taught them that priests and monks are people too.

“I don’t think I ever thought about that before I came here,” says Theresa. “Those relationships that you develop in these walls are deep and they mean a lot. Saint Meinrad is a beacon of hope and hospitality and love, and the world is crazy at times. It’s really good to know this place exists.”