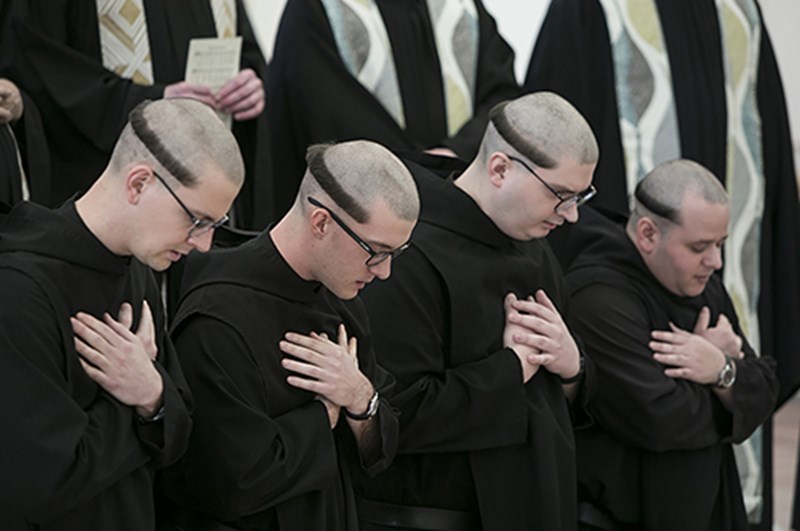 "And with eyes wide open to the deifying light, and with astonished ears let us hear God's voice daily crying out to us..."   RB Prologue: 9

Prayer is the mainstay of the monastic life. Indeed, without the community's commitment to common prayer (called the "work of God" by St. Benedict), and times for lectio divina, the slow and deliberate pondering of the Word of God in solitude, there would be no basis for monasticism's claim to be a viable way of life for serious Christians - and monks and nuns are meant to be serious Christians.

Prayer ranks first in priority in the mindset of the Benedictine. But, that's not just because St. Benedict wanted to create a lifestyle for outwardly pious individuals. By the medieval period, monasteries were regarded as "dynamos of prayer," which the rest of the busy Church, taken up by the urgent need to Christianize a violent and sinful world, could lean on for success!

Something went awry, however, and not far into the medieval period monasteries had begun to prolong their community prayer and create an imbalance in the life. Wealth accrued to the monasteries in exchange for prayers on behalf of donors' souls. The medieval Benedictine liturgy would, in various places, become so elaborate and convoluted, and require so much time to complete, that moderation in all things as legislated by the Rule (48:9) was practically suspended as a monastic value. Happily, today, the Saint Meinrad community enjoys a more balanced mix of prayer and work, even including times for recreation.

The monastic way, and our Rule, is meant to support a life of prayer. Prayer, in turn, feeds the monastic life - but prayer is not the whole of life! Far more than merely an activity to keep the monk from being idle, prayer  (ora) trains us to be open and receptive to the light and voice of God, so that we can determine our actions with respect to the demands of charity.

Benedictine moderation protects "the good of all concerned," while allowing for discipline strict enough "to amend faults and safeguard love" (RB Prologue: 47), without being too harsh or burdensome for the "faint-hearted" (RB Prologue: 46; RB 48:9).

To maintain the right mix of things, monastics have to be committed to prayer that trains us to "hear God's voice." The discipline of lectio divina exercises the interior senses to be receptive to God's Word, challenging us to move out of our comfort zones, and admonishing us to be like Christ  for  others, and readily to welcome Christ in  others (RB 53:1).

"Reading" the demands of charity - hearing God's voice - is the fruit of the daily discipline of prayer. This is why prayer (ora) is first in the order of Benedictine life, or any Christian's life, if we're serious about doing the will of God - which is, after all, what our work (labora) is meant to be about!