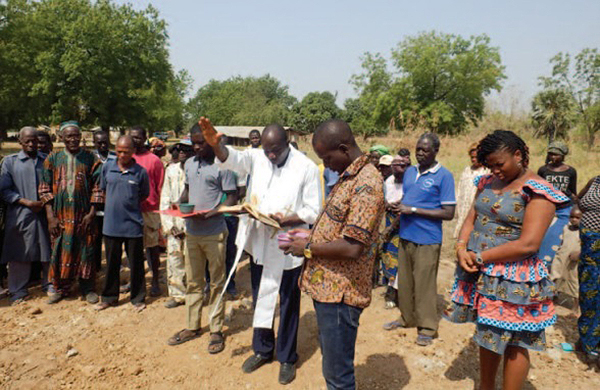 It’s interesting how a simple conversation can change lives.

Dr. Baker, associate professor of Church history in the Seminary and School of Theology, recalls when a Benedictine monk from the West African country of Togo was one of her students. Br. Philippe Neri Tchalou, OSB, arrived in 2011 and took several of her classes while studying for the priesthood.

Baker had given a formation talk about the parish twinning program in Haiti, where parishes in the U.S. connect with Haitian parishes to provide assistance and support.

Afterward, she recalls, Br. Philippe asked her if there was a group that could help his home village near Datcha, Togo, which did not have a water well. Togo is 13th most underdeveloped country in the world, according to a 2019 report by Global Finance.

Baker explains that each day the villagers walk two to five kilometers to another village for water. “Schoolchildren would gather water before going to school,” she says. “Sometimes they would be late for school because they were busy carrying water.”

Baker agreed that installing a well seemed like a project that some group could undertake. “I thought it was going to be an easy question. I’m thinking, ‘Oh, I’ll just make a few phone calls, and of course somebody surely will pick up this project.’ What I didn’t realize was how hard it is to find someone to do work in Togo.”

She found groups working in Togo, but they wouldn’t respond to her inquiries or were too busy with other projects to take on another. Meanwhile, Br. Philippe graduated, returned to Togo and was ordained a priest.

The project remained on her mind, but she couldn’t seem to make progress. “I kept thinking about them having no water,” she says.

Then, two years later in 2017, she was visiting India when she heard an Indian missionary priest talking about his work in Nigeria. He was with a religious order called the Society of African Missions (SMA). She asked him if his group ever did work in Togo, such as wells. He said yes.

However, the priest left before she could get his contact information. But she remembered he was an SMA priest and so she set about contacting them. She finally located a contact for SMA priests in Togo and emailed them. Within hours, she had a reply.

The SMA priests knew the contractors in the area and could coordinate the project. They just needed the money – about $10,000 to build the well.

Even if Baker could raise the money, she needed help to process the donations and transfer the funds to Togo. To overcome this obstacle, she contacted a retired professor who was affiliated with a group doing similar work in Haiti. He told her that his group, Rich in Mercy Institute, could be the fiscal sponsor, which would ensure that the project was credible and the gifts would be tax deductible.

With that in place, she began asking people for donations. She wrote letters to people she knew and asked them to spread the word. The response was amazing. “I still remember the day that somebody sent a $5,000 gift, and I literally went running into the faculty lounge weeping. I was hoping people would send $100 or $500, and here I had $5,000!”

Work began on the well on August 1, 2017, and it was completed by October 18. The village held a celebration with dancing and singing that lasted for three hours. Fr. Philippe returned to his home village to bless the well and expressed his joy at seeing the project finished.

Later, Baker received a copy of the final project report. On one of the last pages is a close-up photo of the inscription plaque attached to the well: Donated by Dr. Kimberly and Benefactors, 2017.

But that isn’t the end of Baker’s story about the African village near Datcha. With the dream of safe, clean water now a reality, the villagers began seeking help for a new project: two public latrines. One would serve the village school and the other would provide toilets for the rest of the community.

“I thought we were finished,” she says. “Then I find out they don’t have latrines.” A few months later, she began spreading the word about the new project.

By December 2018, funds were coming in and work could begin on the school latrine, which cost almost $10,000. The simple toilet system connects to a septic tank and is set up so that one side of the latrine can be used while the other side is closed for composting. There are separate sides for boys and girls, and a separate toilet for teachers.

In less than a month, the latrine was complete and the village gathered for another celebration. Fr. Philippe again did the blessing. In both cases, Baker didn’t travel to Togo, but she received a thank-you note from the students.

They wrote about how happy they were to have latrines so they wouldn’t have to relieve themselves “in the open air or in the bush with the risk to be bitten by reptiles and also pollute the environment.”

And while the project for the public latrine has not yet started, Baker is already thinking ahead. She points to a photo that shows the dilapidated state of the school itself. “The latrines look nicer than the school,” she notes wryly.