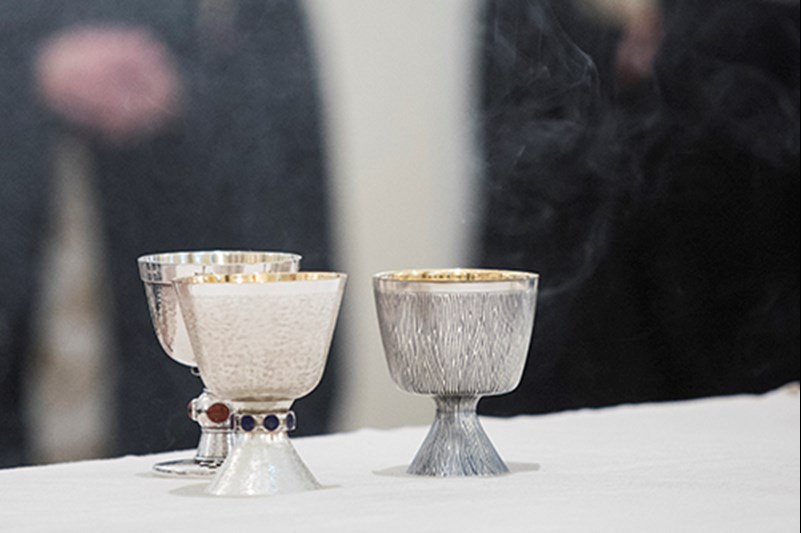 A friend of ours became a Eucharistic minister. She told us how deeply moved she was the first time she served as a minister of the Blood of Christ. We replied that even as Eucharistic ministers for many years, the power of this moment still has a profound effect on us. The appreciation of this ministry as God's holy work never fades.

One Sunday I noticed something. As I lifted the cup, there was a brief moment of recognition in the eyes of the receiver as the words, "The Blood of Christ," were spoken. When the cup passed between us, I remembered the hands of Christ.

With his hands, Christ touched the leper and cured him. Through the hands of Christ, the blind received sight. When Peter lost faith and began to sink beneath the waves, Christ stretched out his hand to restore him.

At the Transfiguration, the hand of Jesus touched the shoulders of Peter, James and John and called them back to the reality of their work. Parents brought children to Jesus for his touch and his blessing. With his hands, Christ broke the bread and lifted the cup. Finally, the same hands that served, blessed and healed were nailed to the cross in crucifixion.

Each Holy Week, I am struck by how much the hands reaching for the cup have become the hands of Christ. A recently engaged young woman reaches out with a new diamond sparkling on her finger. As she takes the Blood of Christ, I pray that her love and marriage will shine with strength and beauty 50 years from this moment.

A few of the hands reaching for the cup are gnarled and tremble with age. For those with diseases like arthritis, I pray for health and strength. Here is the physician who cared so well for my loved one who had cancer. God bless his gift of caring and healing.

Beautifully manicured nails and a finger with a large emerald grasp the stem of the cup. I know this woman. She has been blessed with abundance, yet her heart is one of service to the poor. I know she gives generously from all that she has. God bless her kindness.

Babies come in the arms of their parents. With a brief touch, they are given a prayer for Christ's joy and peace in their lives. The workman reaches out, hands calloused, nails broken. In line are the chef, the teacher, the beautician and the accountant. Through their hands, they pour out their faith.

Each day, millions of faithful hands take the cup. The same hands receiving the Body and Blood have become the hands of Christ. Do we really comprehend the power in the phrase "handing on the faith"? Through our hands, the presence of Christ becomes a reality in the lives of others.

From Grounded in God, by Jim and Ann Cavera. Liguori Publications, 2006.