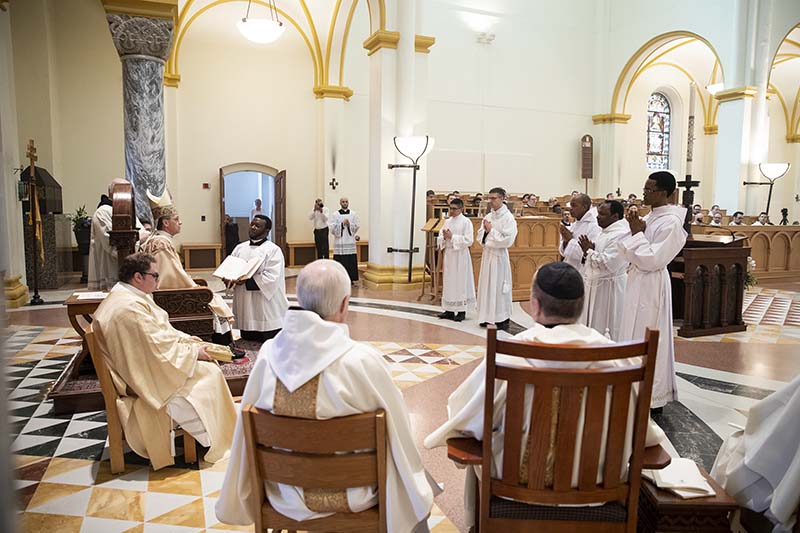 Five seminarians received the order of deacon from the Most Rev. Charles Thompson, archbishop of the Archdiocese of Indianapolis, IN, at the Saint Meinrad Archabbey Church in St. Meinrad, IN, on April 23.

The newly ordained deacons are José Neri and Jack Wright, for the Archdiocese of Indianapolis; Brother Fraternus Fidelis, OSB, for Hanga Abbey in Tanzania; and Brothers Gregory Sambi, OSB, and Deodatus Satu, OSB, for Mvima Abbey, also in Tanzania. All are students at Saint Meinrad Seminary and School of Theology.

Others in their class will be or have been ordained deacons in their respective dioceses.

In the Catholic faith, a deacon can preach, baptize, witness marriages, offer Communion to the sick and aged, and perform other ministerial duties. The newly ordained deacons are transitional deacons, meaning they are preparing for ordination to the priesthood. Many Catholic dioceses also have permanent deacons, who carry out the same role, but are not studying for the priesthood.

Saint Meinrad Seminary and School of Theology offers initial and ongoing formation for priests, permanent deacons and lay ministers. The school is operated by the Benedictine monks of Saint Meinrad Archabbey.