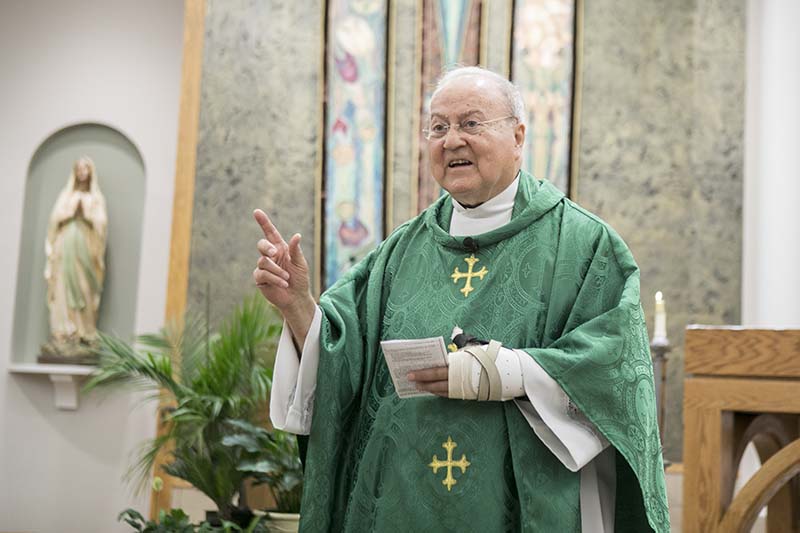 Leader, visionary, compassionate, gentle soul, etc. These are all words people have used to describe Fr. Joe Ziliak. He died earlier this year on February 8 at the age of 85. In his almost 60 years as a priest for the Diocese of Evansville, Fr. Joe answered the call to help whenever and wherever needed, including at Saint Meinrad.

Fr. Joe will be posthumously awarded the Distinguished Alumnus Award during the Alumni Reunion this summer. Tim Florian, director of alumni relations at Saint Meinrad, met with Fr. Joe after he was notified that he was chosen to receive the award.

“Apart from being completely surprised, Fr. Joe expressed sincerely that he was very honored and humbled to be chosen as a Distinguished Alumnus of Saint Meinrad,” Says Tim. “Fr. Joe had a deep love for Saint Meinrad, and he was an inspiring example of what it means to be a priest.”

In a 2016 interview Fr. Joe stated that the Benedictines have been with him his whole life. He was baptized at St. Benedict’s Church in Evansville and attended grade school there until eighth grade. St. Benedict’s Church was founded and staffed by monks of Saint Meinrad. Monks were family friends and would come to his home for dinner.

After grade school, Fr. Joe attended high school and college at Saint Meinrad College, graduating in 1958 with a bachelor’s degree in philosophy. He directed music and served as first prefect, the highest student position, during his sixth year of studies. The years he spent at Saint Meinrad were formative and the place remained close to his heart after he left the Hill.

Fr. Joe went on to study theology at Collegium Canisianum Seminary and University of Innsbruck, Austria. He was ordained to the priesthood on April 7, 1962, in Innsbruck. His world travels began during his time in Austria.

“I had a motorcycle and we traveled in the summers for three months,” he said during the 2016 interview. “We’d take off, two on a cycle usually, and we would get to do all kinds of things that way.”

Fr. Joe returned to the United States after his ordination and studied English literature at the University of Notre Dame. He graduated with a master’s degree in August 1966. He then taught English, German and history as a founding member of the faculty of Magister Noster Latin School in Evansville. He also served as vice rector and librarian of the school.

Fr. Joe’s career in communications began in 1964, when he was assigned to be the diocesan director of radio and television. In 1968, he became editor of the Evansville edition of The Criterion, the newspaper for the Archdiocese of Indianapolis.

After two years, he became the founding editor of The Message, the diocesan newspaper of Evansville. Under his direction, the paper made a profit in its first year. The Message also became the third Catholic newspaper in the United States to own its own typesetting equipment, giving the staff more control over the quality of the printed product.

In 1984, Fr. Joe was elected to a two-year term on the Catholic Press Association Board of Directors. He was reelected in 1986 to a three-year term. During that time, he served as treasurer and chaired two national conferences, bringing the conference to Evansville one year.

He was pastor of Nativity Parish, Evansville, from 1980-1987. In 1987, Fr. Joe was assigned as pastor of St. John the Baptist Parish, Newburgh. At that time, he became the associate publisher of The Message.

He served at that parish until he retired from pastoral ministry in 2012. Over the 25 years Fr. Joe spent as St. John the Baptist, the town of Newburgh grew and so did the parish. The parish built the church in 1993, added onto the school at least four times, and built a new rectory. When he retired, there were about 750 families and 5,300-5,400 parishioners.

After retirement, Fr. Joe continued to help at parishes around the diocese and was the vicar for retired priests until his death.

At Saint Meinrad, Fr. Joe was always willing to share his time and talents. He served as class chairman for the Saint Meinrad Alumni Annual Giving Program from 1970 until his passing. As class chairman, he helped keep his former classmates connected to their alma mater.

From 1994 until 2000, Fr. Joe shared his experience and expertise in the communications field by serving on the Saint Meinrad Communications Advisory Board. He also served on the Board of Overseers and its Resource Development Committee from 1999-2005.

Most recently Fr. Joe spent two three-year terms on the Alumni Board of Directors.

“Fr. Joe Ziliak was wonderful, so very kind, firm in his faith and generous of his time in service to the Diocese of Evansville, the Saint Meinrad Board of Overseers and, most recently, the Alumni Board of Directors,” says Chris Carr, president of the Saint Meinrad Alumni Association.

“Personally, Fr. Joe was a friend, mentor and spiritual advisor when needed, and I am grateful to have known him and served with him on the board. We were a better board because of his active engagement and contributions.”

Fr. Joe’s life of service will be celebrated on Tuesday, August 2, when he is posthumously presented the Distinguished Alumnus Award during the Alumni Reunion banquet.