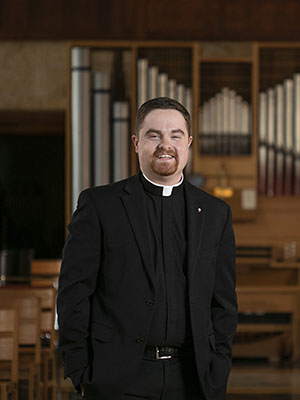 Corey Bruns graduated from Saint Meinrad in 2021 and was ordained a priest for the Diocese of Owensboro on May 22, 2021

For seminarian Dcn. Corey Bruns, this year has been full of bittersweet moments and unexpected joys. Dcn. Corey is in his fourth year of theology, studying for the Diocese of Owensboro, KY.

In mid-March, when his classmates were headed back to their home dioceses and religious communities to finish semester classes online, Dcn. Corey chose to stay at Saint Meinrad in the seminary cloister.

His deacon ordination was scheduled for April 4, and he planned to stay on campus a couple weeks until his ordination. God had different plans. At first, Dcn. Corey was told that he had to reduce his guest list from 500 invitees to 10. Then, his vocation director called to tell him the ordination was postponed indefinitely.

Dcn. Corey went to the chapel to pray. “I stood in front of Our Lady of Einsiedeln and I said, ‘Mom, you’ve seen me through seminary, see me through this. I’m not going to cry, not going to worry about it. It’ll happen when it happens. Just let God’s will be done with it.’”

He decided to stay at Saint Meinrad for the rest of the school year. Dcn. Corey was supposed to be the deacon chanting the Exultate at the diocese’s Easter Vigil. Instead, as Easter approached, he began to organize and plan the music for the seminary’s Holy Week services. He says it was a joy because it was probably the last time he would be able to play the organ and plan the music for Holy Week.

After the semester ended, Dcn. Corey headed to Quincy, IL, to visit his family. He received a call from his vocation director informing him that he would be ordained a deacon on the feast of the Immaculate Heart of Mary, June 20, 2020.

When June 20 arrived, Dcn. Corey felt an incredible peace. He was ordained at St. Stephen Cathedral in Owensboro, surrounded by 200 masked family and friends. For the rest of the summer, he was assigned to a bilingual parish, St. Joseph and Paul in Owensboro.

It was unlike any other assignment Dcn. Corey has had because of the pandemic. A normal summer assignment for a transitional deacon would include a lot of hands-on ministry: marriages, funerals, baptisms, visiting people in the hospital and the homebound.

The only hands-on ministry he was able to do had to happen in the church. He preached most days of the week and gained experience preaching in Spanish, he baptized three babies, and when hospital restrictions were eased, he visited a couple in the hospital.

He likes to keep a full plate, but he had a lot of time to prepare homilies and pray. Even though the summer looked different than he had imagined, he believes his vocation has been affirmed.

“I’m convinced that people need to know that God loves them deeply and passionately,” says Dcn. Corey. “In seminary, I’ve been able to get glimpses of being that instrument of God’s love. But being able to be a sacramental minister in the sense of bringing God’s love as a member of the clergy was a new and rewarding experience.”